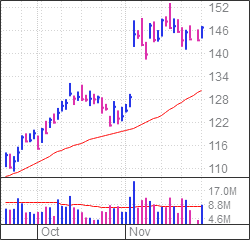 Qualcomm stock has formed a four-weeks-tight pattern with a buy point of 153.43, according to IBD MarketSmith charts. The pattern is an extension of the more common three-weeks-tight stock chart.

Investors could take a position in Qualcomm stock when it breaks above its short downward-sloping trend line or gets above the bulk of the four-weeks-tight pattern.

Morgan Stanley named Qualcomm as one of 10 stocks best positioned to benefit from 5G infrastructure investment and smartphone demand. Others include Apple (AAPL) and Taiwan Semiconductor Manufacturing (TSM). Apple iPhones use Qualcomm chips, which are manufactured by Taiwan Semi.

Morgan Stanley rates Qualcomm stock as overweight with a price target of 159.

Qualcomm is best positioned among U.S. semiconductor stocks to profit from the 5G upgrade cycle, Morgan Stanley analysts said in a report to clients. It is benefiting from higher content in 5G smartphones and overall strong demand for next-generation handsets, analysts said.

Qualcomm is on the IBD Big Cap 20 watchlist.

San Diego-based Qualcomm plans to tout its 5G semiconductor capabilities on Tuesday and Wednesday during its annual Snapdragon Tech Summit. The event is virtual this year and will be livestreamed to participants.

On Oct. 9, Qualcomm stock broke out of a flat base at a buy point of 124.03, according to IBD MarketSmith charts. It notched a record high of 153.33 on Nov. 18, two weeks after it delivered a beat-and-raise quarterly earnings report.

Qualcomm stock has an IBD Composite Rating of 98 out of a best-possible 99, according to the IBD Stock Checkup tool. The Composite Rating — an easy way to identify top growth stocks — is a blend of key fundamental and technical metrics to help investors gauge a stock’s strengths.

Qualcomm ranks sixth among 31 semiconductor stocks in IBD’s fabless chipmaker group. That group ranks No. 29 out of 197 industry groups that IBD tracks.

Qualcomm stock has an IBD Relative Strength Rating of 91. That means it has outperformed 91% of stocks over the past 12 months. Choosing highly rated stocks from leading industry groups in a confirmed stock market uptrend generally increases your chances of making profits in growth stocks.

Other semiconductor stocks selected recently as the IBD Stock Of The Day include Advanced Micro Devices (AMD) and Qorvo (QRVO).

AMD stock on Monday broke out of a double-bottom base at a buy point of 88.82, according to IBD MarketSmith charts.

Qorvo stock on Monday popped above a 154.53 buy point from four-weeks-tight pattern.

Is Apple Stock A Buy Right Now? Here’s What Its Stock Chart Shows

Semiconductor Stocks To Buy And Watch After Third-Quarter Earnings